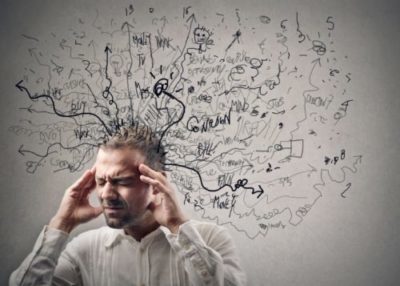 As many as sixty percent of folks with anxiety also suffer from depression. Depression and anxiety are distinct from one another, while also overlapping. Depression can involve intrusive negative thoughts and pessimistic fears that overlap with worry and anxiety. Unremitting symptoms of anxiety and panic contribute to hopelessness and helplessness, leading one to feel trapped without escape from emotional pain.

As such, changing our thoughts helps both our anxiety and depression.

There are two important things to keep in mind:

1. Over ninety percent of the things that we fear never eventuate

If you were to add up the number of times that you worried about some imminent disaster, and then compared this to the number or disasters that actually occurred, what do you think you would find?  Undoubtedly, the vast majority of the things that you worried about never eventuated. In spite of your worst fears, the speech you had to give was not the debacle that you had predicted, you survived the dreaded trial, and your boss didn’t fire you.  Upon reflection, the sky rarely fell, and after each episode of angst, your life continued pretty much as before.

2. The consequences are rarely catastrophic

Even on those rare occasions when your feared situation did eventuate, the consequences were usually not as bad as you had anticipated. Most often, there is some discomfort, pain, or inconvenience, but rarely any long-term disastrous consequences. Of course, this is not to make light of the serious situations that sometimes do occur. On rare occasions, our worst fears are realized and have major negative consequences – the diagnosis of a lift-threatening accident or death of a loved one.  All of these events can have major long-term consequences and should not be trivialized. The point is, however, that the majority of times when we torment ourselves with worry, the consequences are really not as bad as they seem.  Sometimes, situations that appear to be disastrous can have some positive consequences.

Sometimes even a very simple statement can remind of a more reasonable perspective and so put a stop to catastrophic thoughts.  The following list provides examples of coping statements that can be useful to short-circuit catastrophic ruminations. You might like to prepare a statement from the list to use when you need it.

You Can Do It!

Replacing negative self-talk with more positive and realistic thoughts (or statements) is healthier in the short and long-term. When faced with anxious thoughts that freak us out, or ones that drop us into a well of depressive despair, we can learn to choose different ones.

You can do it!

“7 Ways to Deal with Negative Thoughts” by Patricia Harteneck, Ph.D.

“Rumination: A Problem in Anxiety and Depression: Springboard Out of Negative Networks into New Solutions” by Dr. Margaret Wehrenberg.