Lawyers are control freaks.  Okay, maybe they have to be. There’s is so much going on that they actually do have to control things to be good at their jobs.  But it creates a grind of perpetual stress; every day, all-out stress seizures to control of events and people that are all too often uncontrollable leaving them depleted by the constant firing of their bodies’ fight-or-flight reaction. 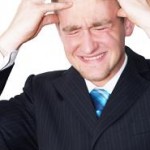 We all learned in high school biology about the fight-or-flight response; a binary system of survival that kept our hairy, grunting ancestors alive in prehistoric times when meandering about the Sarengeti plains.  This lighting quick response evolved to make us scamper from threats we could outrun and brawl with ones we couldn’t.

Today’s’ lawyers are embedded with the same nervous system their Neanderthal ancestors had 30,000 years ago.  When they’re threatened on the job, their heart rate fires, breathing becomes shallower to divert oxygen to muscles and stress chemicals are dumped into their bodies.  This all happens automatically, before they’ve even had a chance to think about it.  And it happens even when they’re not being chased by a ravenous cougar or fighting a loin clothed adversary.

When our body’s stress response is triggered, it does not know the difference between true physical threats to our physical survival and psychological threats to our sense of self.  Think about how much our hearts pounds in a contentious deposition, for example.  Our bodies, unable to actually physically run or fist fight in the office, surge with stress hormones as if we were in a bloody life-or-death battle for control of that deposition with a dastardly adversary.

For lawyers prone to anxiety and depression, the daily surges of the stress hormone cortisol are particularly troublesome because of its impact on the hippocampus and the amygdala in the brain.

The hippocampus is that part of the brain that remembers details and helps you put incoming information into context.  It is without emotions, registering and storing details of events, functioning like a Joe Friday from Dragnet:  “Just the facts, mam.” 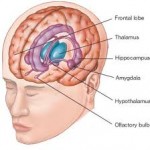 The amygdala is the brain’s early warning system and is a major cause in genetically depressed moods and negative thinking. It acts as an importance meter, registering tone and intensity and tells your brain instantly if it should prepare for trouble.  It scans the environment looking for danger.

Too much cortisol, over too long a period of a time, can cause depression and result in actual changes to the brain.

“Chronic depression causes structural changes to the brain.  Research has showed that depressed patients had measurable changes in the amygdala and the hippocampus, crucial players in the stress response.  We knew the amygdala was central to our emotional life, but they also found that the memory center was also involved in stress and depression.  High levels of the stress hormone cortisol kill neurons in the hippocampus.  If you put a neuron in a petri dish and flood it with cortisol, its vital connections to other cells retract.  Fewer synapses develop and the dendrites wither.  This causes a communication breakdown, which, in the hippocampus of a depressed brain, could partly explain why it gets locked into thinking negative thoughts – it’s recycling a negative memory, perhaps because it can’t branch out to form alternative connections.  At the same time, MRI shows that new nerve cells are born every day in the hippocampus and possibly the prefrontal cortex – two areas shriveled in depression.  Now we see depression as a physical alteration of the brain’s emotional circuitry.

Norepinephrine, dopamine, and serotonin are essential messengers that ferry information across the synapse, but without enough good connections in place, these neurotransmitters can only do so much.  As far as the brain is concerned, its job is to transfer information and constantly rewire itself to help us adapt and survive.  In depression, it seems that in certain areas, the brain’s ability to adapt grinds to a halt.  The shutdown in depression is a shutdown of learning at the cellular level.  Not only is the brain locked into a negative loop of self-hate, but it all loses the flexibility to work its way out of the hole.”

In the privacy of their offices or in anonymous phone calls, I’ve heard many lawyers with depression tell me they hate themselves.  They hate themselves because they’re stuck in depression and spinning their wheels.  Rather than see this predicament as something that can be explained as an illness going on in their brain, they mercilessly punish themselves and feel they’re weak and lazy.

“For an overwhelming number of people today, the result of the vicious circle of perpetual stress is a state of permanent malfunction: dissatisfied, irritable, overwhelmed and hopeless, out of control, frightened, physically run down and in pain.  For want of a better term, this is what I call the “Perpetual Stress Response.” Overwhelmed by too many stress hormones in our system, our cells close down receptor sites to try to compensate; but that just makes the endocrine system pump out even more stress hormones.  Continually bathed in neurotransmitters telling us there is constant danger.  And our brains become rewired by stress, our neural circuitry restricted to firing along preconditioned pathways, so that we are literally unable to think of new solutions, unable to come up with creative responses.” 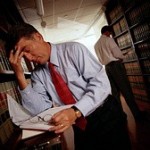 Anxiety and depression are terrible coping mechanisms.  If so, why do lawyers in such large numbers suffer from these maladies?  Because they don’t know what else to do and don’t realize the damage they’re doing to their bodies and minds by living with the fight-or-flight furnace turned on high all day long.

So what is a depressed lawyer to make of all of this?  Like recovery from any illness, awareness goes along way.  For many with depression, it will take a long time and periods of suffering, to see, to truly see, that anxiety and depression don’t work as coping mechanisms and that they have to learn better ways in which to run their lives to help their brains.

In my next blog, I’ll explore what we can do about this situation.