I have depression, at times severe, and high anxiety.

Things were worse when I was in private practice and did not like my job. Keeping track of my time in 6-minute increments was stressful.  I hated marketing, even though I was good at it; because I am more of an introvert, I engaged in a lot of non-genuine behavior.  That’s never a good idea because after awhile, you sort of lose track of yourself.

Since I did not like two-thirds of my job, motivation was a problem.  And, with lack of motivation the depression increased, of course, and the occasional “sick” day popped up, or I would come to work late but then work into the night, thereby perpetuating an unhealthy lifestyle (eating fast food, etc.).  I just got sick of myself.

One morning I thought, by the end of this year I need to be out of this law firm.  I decided I needed a job that I felt mattered.  Whether that was with a not-for-profit organization or something else, I didn’t know.  Fortuitously, a judge I had clerked for after law school called me, and I returned to working for him as a law clerk.  I thought I would only stay one year, but it became three.  The hours were much more manageable, I started taking better care of myself, and I felt my job mattered. I essentially hit the pause button in my career.

I was extremely worried when I went back to clerking because all future employers would think it was odd and ask about it (and they have).  But it did not derail my career, I think because I became more confident in my choices, and more genuine. After three years of clerking, I returned to private practice, but rather than represent employers in labor and employment cases, I switched and represented employees.

Ninety-nine percent of lawyers in the labor and employment law field do not switch.  I’ve never regretted it.  The power structure between employees and employers is so one-sided it was easy to feel like what I was doing mattered, particularly when dealing with an employee who had a family and had been fired. My hours were sometimes just as long, but it felt different because I was enjoying myself.  The billing didn’t stress me and I didn’t have to market to unions; that’s not how it works in that arena.  I was right to pick a job that did not involve marketing — I’m actually good at it, but it stresses me out.

For personal reasons, I had to give up my job as a union attorney but the criteria, in looking for a new job, remained the same — it had to be a job where I would feel like what I do matters to me.  I landed an awesome job with the federal government and now feel like I have the best job in the world.

I didn’t realize until later in life that not everyone has a hard time getting out of bed, nor am I lazy, but I’ve finally found the right mix of meds and have been in therapy.

While I still have depression, I’ve become much more assertive about my health as I’ve gotten older, and much less ashamed about my depression.  A few years ago I had to do an outpatient program for 5 weeks, where I worked only half a day.  But I presented the situation to my boss as something I needed to do to make myself healthy.  I also started and stayed in therapy; that has not been an easy task for a few reasons, one of which is because we, as lawyers, are always busy.  I also have modified my type-A personality.  When I am writing a brief, letter, memorandum, etc., I tell myself, sometimes good enough is just fine.  That has helped with the depression because this saying causes me to relax and reminds me of what is important in life. 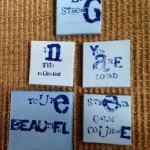 My journey has been difficult at times and during the midst of it, I had the idea of painting a motivational saying on a 3×3″ canvas.  Now I do it for others, and they find it equally as helpful and comforting. I do it because I want you to know a fellow sufferer cares.  If you would like me to make one for you, email your saying to me at bluesyart.gmail.com, along with an address to send it to. Your saying can only be 3-4 words b/c of the size of the canvas.   It’s all free — I find it so rewarding to make these for others.