Those of us who suffer from depression tend to think of this state of mind (and being) as an obstacle to moving forward.  Is there a useful purpose to be found when we are depressed? 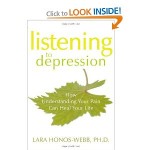 Lara Honos-Webb, Ph.D., thinks so.  Her book, Listening to Depression, is full of stories and examples of showing that depression is not only not a mistake, but can yield powerful messages that unlock our life purpose.  The central themes she explores are: Depression symptoms are communications to you from yourself, about yourself.  Depression is a time-out to re-vision and re-figure your life.  Depression is a signal that something new has to come into your life.    I met Lara almost three years ago, when she came for coaching.  At that time she was working as a clinical psychologist and professor.  Since then she has added author and mother to her resume.

Lara’s passion for this subject was fueled by her own struggle with depression in college—which led to getting back on track with her life’s work. “I came from a family which was not at all stable financially.  Because of that I wanted to choose a career that would be sure to give me financial security, so I was planning to major in business.  However, before long I started feeling very depressed.  I had lost interest in business very quickly. Luckily, I decided to take some psychology classes.  I found psychology is where my real interests lie, and this is my life path.  I still thank God for that depression, which I now see as a signal of being out of alignment.” 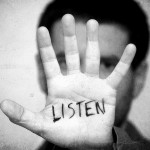 After developing her own clinical practice and supervising hundreds of cases on depression, Lara’s skills and mission came together.  She says, “A lot of the time, clinical psychologists don’t take into consideration that depression may be an accurate reflection of what’s going on with a person.  Ironically, a person’s friends can easily point out why they are depressed, but clinicians sometimes miss the obvious!  In most cases, I believe that depression is not a mental disorder, but a reflection of choices that people are making that don’t fit.”

Lara makes it clear that, in cases where depression is severe or the person is suicidal, he or she must be stabilized before addressing the roots of their depression. Similarly, anyone dealing with depression resulting from external problems and situations, such as addictions, on-going physical or emotional abuse, debilitating ethnic or gender discrimination, or poverty and homelessness must first address these conditions. Depression is a Wake-up Call About How You Are Living your Purpose . According to Lara, our feelings of depression are a call to bring our life into alignment with our own needs, values and desires.  How do people get off track in the first place?

Operating from a sense of loyalty.

While loyalty allows people to belong and feel connected, it could hamper our individual choices.  Think of people who just slide into a family business because it’s there.   If you are depressed, notice where you might be conforming in order not to rock the boat. To get back on track, differentiate between how you genuinely agree with your family or social milieu, and where your dreams and interests are different.

Not believing in yourself

Many people feel they are not “good enough” to go for their dreams.   For example, someone may want to be a doctor, but comes from a working class family.  The message from their parents and milieu might be, ‘Who do you think you are?’  Adding unconscious loyalty to self-doubt builds a powerful justification for not going further than their parents or friends.

If we never take time to ask ourselves what we really want, or to notice how we may be different from those in our upbringing, we never take time to get on track.  Need for security.   Is our choice of career based solely on the financial reward?  We build real security by investing in ourselves, learning new things, and being willing to take on new challenges.

Fear of the unknown

To move past fear, we have to have a compelling reason to move forward—such as, a creative urge that won’t go away, a desire to have our own business, or an urge to live according to our own values.  If those compelling urges are suppressed, depression follows.  If we don’t listen to our inner voice, we sink deeper into depression, or even find that we have an accident or illness that amplifies the message that something has to change. Lara quotes the philosopher, Heiddegger, “‘Breakdown is always in the service of breakthrough.’”

Lara writes in her book, “Depression feels like all the lights have gone out.  When the lights are out, the only thing you can see is that which is lit from within.  And that which is lit from within is your life purpose.” One story describes Jamie, a young man who is married with children, thirty-five, and deeply depressed–almost suicidal. Through counseling (though not with Lara), he came to recognize that the only thing truly lighting his path was his desire to be a comic-book artist—though he had experienced no success so far, and did not believe that he could support his family from his creativity. He got the idea to start an on-line comic book, and was the first one to start such a site ( www.wantedhero.com.)

His is a good example of translating one’s personal pain into creative channels that help others. The site became a success, and is not only entertaining, but healing. His topics have individually and socially inspiring messages–the gift, so to speak, of his depression.  “His original issue was being indiscriminately loyal,” says Lara, “Jamie had to learn to separate himself from what others think, and set boundaries that allowed him to do what he could do best”

Use The Four P’s to Heal Depression

According to Lara, depression can be healed by letting your life be guided by pleasure, presence, power and permission.

So many times depression is a call to re-enter life—instead of just going through the motions.  Instead of focusing all your time on performance demands—which ultimately is one-sided and draining—be sure to give yourself a few simple pleasures, like browsing in bookstores, walking with a friend, playing with your child or bicycling.  Lara notes, “Since I wrote the book, I would add that having more pleasure in your life is actually very practical.  Taking pleasure in something automatically brings its own sense of fulfillment.   You don’t have to wait to “make it someday,” to feel happy.  When in a good mood, you also perform better in everything.  You attract people and opportunities because you are operating at a higher energy level. You have the energy to see more possibilities and take more chances.”

Make a point of being present in the moment each day. It’s the difference between being and doing–performing.  Lara says, “Presence happens when you are just having lunch with your child, just watching him make a mess, and not being concerned about it.  Ironically, the work of depression pushes you into being, not doing.  Some people who survive suicide attempts say that they learn that just being is a great gift.  Therefore, the failure of one of your ‘doing” goals could be the thing that connects you to your being in this moment.”

Power reminds us to be the author of our own life. Lara says, “I call this re-writing the rules.   For example, women often think motherhood has to be a sacrifice, but there’s power in making authentic choices instead of simply conforming to a life that doesn’t work for you.  You can re-write the rules for yourself and say, ‘I don’t have to solve everybody else’s problems.’ Or, ‘I don’t have to make every single choice based on security.’  Re-write the rules about having to get together for toxic family holidays; make taking care of yourself the highest priority.   Another example is a man who really wanted to work in a pet store. “ His main obstacle between himself and his life purpose,” says Lara, “was that he believed that men didn’t do those sorts of jobs.  He found that he had the power to change his thinking.”

Practice giving yourself permission to see life a different way.  For example, some of us have to learn that life doesn’t have to be a struggle (despite our past experiences.)  The future doesn’t have to be a repeat of the past. Give yourself permission to explore something, or simply to be happy (despite others who want to draw you into the misery-loves-company conversation.).

Deep depression from loss takes us on a journey.  How do we ever recover from the loss of a loved one, of losing our home, livelihood, or health?  Lara says, “Finding meaning in a tragic loss is essential if you are to recover.  For example, I have a story about a woman who survived a car crash caused by a drunk driver, in which her parents and sister were killed.  She brought that tragic loss into her life purpose and became a lawyer and an inspiring public speaker about drunk driving.  Sometimes these events are, mysteriously, a stepping stone to revealing a life purpose.”

1 thought on “Listening to Depression”