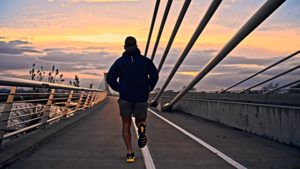 Exercise is good for you. If you’re procrastinating a run or putting off a walk, then we recommend that you close your computer and get outside, content in the knowledge that you have fully grasped the thesis of our article. If you are still here, then we assume that you would like to know more.

Individuals who exercise a total of 7 hours per week have a premature mortality rate 40 percent less than those who exercise less than 30 minutes per week. Physical activity also appears to reduce your risk for colon and breast cancers. Furthermore, there is evolving evidence that physical activity may also reduce your risk for endometrial and lung cancers.1–3

Research also suggests that health benefits may be appreciated from even modest exercise programs. As little as 2.5 hours of exercise per week significantly reduces your risk of type 2 diabetes and cardiovascular disease. When it comes to exercise, half a loaf really is better than none. In fact, physical inactivity is estimated to cause one in 25 deaths worldwide each year.1–3

For reference, maximal heart rate can be calculated by taking 208 – 0.7 x age (an older, unvalidated version of this equation used 220 as the base).4 As an example, a 30-year old’s maximal heart rate is calculated to be 187 beats per minute (“bpm”). This means that in our 30-year old example, a moderate-intensity activity should achieve a heart rate of at least 94 bpm while a vigorous-intensity exercise should aim for a target of at least 131 bpm.

We will return to these parameters in a moment, but for now, let’s turn to the benefits of exercise for the brain.

Before diving in, it is necessary to review the concept of effect sizes. An effect size expresses the difference between two groups; usually between a treatment group and a control group. Effect sizes are calculated as numbers but can be represented categorically as “small,” “medium,” “large,” and “very large.”5–7

Very generally, a medium effect size should be able to be “seen” by the naked eye. For example, in Professor Jacob Cohen’s pioneering work on the subject, he cited the difference in average height between 14-year-old and 18-year-old females to be an example of a medium effect. As an example of a large effect, Professor Cohen cited the difference in IQ between a “typical” college freshman and a “typical” Ph.D. holder.5 For the purposes of our discussion, the larger the effect size, the more likely it is that the treatment (e.g. exercise) is better at treating depression than the control condition (e.g. no exercise).

With our introduction to effect sizes out of the way, let’s study the effects of exercise on the brain.

Studies have demonstrated a strong antidepressant effect for exercise. For example, one meta-analysis that examined well-controlled studies of exercise as an intervention for clinical depression found a very large effect size when compared to nonactive control groups. Notably, previous work had demonstrated a large effect size for study populations of undifferentiated clinical and non-clinical subjects with depressed mood.8 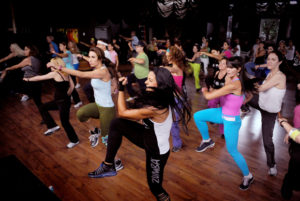 We wish to pause at this point to put these antidepressant effect sizes for exercise in perspective. Let’s turn briefly to effect sizes associated with various psychiatric and general medical pharmaceuticals and treatments. We will use the most optimistic estimates of efficacy for the various classes of interventions so as to level the playing field as much as possible. We fully acknowledge that we will not be comparing apples to apples. The following discussion is not meant to be a definitive statement regarding the efficacy of various treatments. Instead, we hope that the comparisons will help place the magnitude of exercise’s effect size in context.

There are numerous potential confounding variables in this very brief comparative overview. Despite every effort to control for the various confounds, it is likely that depressed cohorts who were able to exercise were qualitatively different in some ways from some of the populations included in electroconvulsive trials for example. Researchers have employed various techniques to try to eliminate these confounds, and there are reasons to treat much of the data as valid, but caution is certainly warranted.

Antipsychotics for acute psychosis, antihypertensives for high blood pressure, and corticosteroids for the prevention of asthma exacerbations all have similar medium effect size. Whereas, antibiotics for ear infections and metformin for diabetic mortality have small effect sizes. To find a general medicine medication with an effect size on par with exercise we have to turn to proton pump inhibitors and their large effect size in the treatment of esophagitis.9 In fact, the mean effect size for all general medical medications corresponds to a small effect.10

Research has revealed benefits for exercise in other domains of mental health as well. Meta-analytic reviews have found a small effect size for exercise on state or trait anxiety.8 However, upon closer examination research reveals that exercise has a stronger effect on state anxiety than on trait anxiety.12

Evidence also suggests a broader application of exercise beyond strictly pathological states.13–15 One large non-clinical population-based study demonstrated that individuals who exercised more than two times per week experienced reductions not only in depressive symptomatology, but also in cynical distrust, anger, and stress when compared to individuals who exercised less often.15

There is also significant evidence for a dose-response relationship between exercise and mental health. Exercise regimens with higher intensities, greater frequencies, and longer durations tend to lead to greater response rates in depressed populations. Interestingly, depression remission rates seem to peak at moderate levels of intensity, frequency, and duration suggesting that sustainability of a regimen is an important ingredient to consider when developing a program.8

The setting that one exercises in also appears to play a role. Research has demonstrated that exposure to nature and so-called “green space” exerts powerful effects on mood and self-esteem. Exercising outdoors in a natural setting with trees and plants appears to be superior to exercising in an environment devoid of such “green” qualities. The positive effects rapidly develop with even just five minutes of outdoor time offering a very achievable goal even for busy individuals.3

Interestingly, natural settings with bodies of water present (e.g. streams, rivers, lakes, etc.) appear to offer enhanced benefits over and above those seen in other natural settings.3 Natural settings seem to exert their positive effects on health through a variety of mechanisms; however, it should be noted that the effects are not fully explained by the association of green space and exercise.16 In fact, greater exposure to nature, in general, has been associated with as much as a 12 percent reduction in all-cause non-accidental mortality!17

How does exercise exert these far-ranging effects? 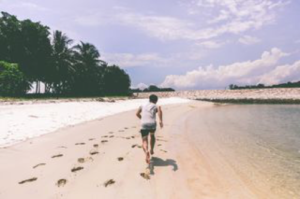 There are many gaps in our understanding of the mechanisms by which exercise exerts its anxiolytic and antidepressant effects. There is some evidence that exercise may increase turnover of serotonin, leading to an adaptive downregulation of the serotonergic 5-HT2C receptor. Activation of the 5-HT2C receptor seems to inhibit dopamine and norepinephrine release. Thus, a downregulation at the 5-HT2C receptor leads to an increase in availability of dopamine and norepinephrine. This effect is thought to be particularly important in the prefrontal cortex and is hypothesized to contribute to the anxiolytic and antidepressant effects associated with exercise.8

In addition to increasing serotonin turnover exercise seems to trigger a release of beta-endorphins. Endorphins are part of the brain’s endogenous opioid system and also tend to produce anxiolytic and antidepressant effects when released.8

From a more macroscopic scale exercise, like antidepressant medication, helps restore sleep patterns frequently disrupted in the setting of depression. Furthermore, evidence suggests that activity in the prefrontal cortex is reduced during exercise and that this modification of cognitive processing may correlate with the subjective anxiolytic and antidepressant effect of exercise.8

Let’s be optimistic and imagine that the preceding discussion helped you move from the contemplative to the preparatory stage of change and that you are preparing to make a change in your exercise habits.19 How much exercise do you need to get before you can appreciate the mental health benefits?

Evidence suggests that an optimal exercise program is about 30 minutes in duration, has a frequency of 2-4 times per week, and is of such an intensity level that an individual achieves 70-80 percent estimated max heart rate.8

Recall that our maximal heart rate from our 30-year old example was calculated to be 187 bpm. This means that the targeted intensity level of exercise for mental health should achieve a heart rate between 130-150 bpm.

Finally, the individual should commit to at least four weeks of the new exercise program to optimize the chances for long-term habit formation. Evidence suggests that while 70 percent of individuals maintain a short-term exercise program, only 50 percent maintain the program for six months.8

We have covered a lot of ground in our exploration of the varied health benefits associated with exercise. 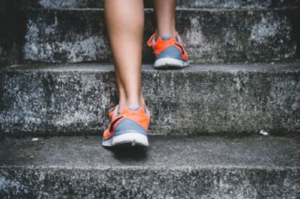 We next turned to exercise and mental health, studying depression as our archetype condition. We found that exercise can be considered a valid “antidepressant” or augmentation strategy in the treatment of depression and that its effects are comparable to antidepressant medication and psychotherapy.

As we discussed before, we are not comparing apples to apples, and direct comparisons between techniques are not fair outside of a given trial. Our point is not to assert the unrivaled superiority of exercise to psychopharmacologic agents, psychotherapeutic techniques, or other therapeutics. Rather, we wish to elevate exercise from a healthy lifestyle habit to an adjunct treatment.

And finally, let’s recall that exercising in natural outdoor settings, ideally in close proximity to a body of water, may enhance the health benefits associated with exercise.

The most effective treatment for a given mental illness is almost certainly to be pluralistic rather than singular. A holistic treatment strategy that targets biological, psychological, and sociological substrates of disease offers a significant synergistic advantage over a singular approach.

Dr. MacKinnon is a psychiatric resident physician at the University of Washington who researches and writes about the neuroscientific intersection of mental health and mental illness. Dr. MacKinnon runs Neuraptitude.org, an online scientific publication dedicated to uncovering the natural capacities of the human mind by exploring topics that reveal, bit by bit, the intrinsic enormity latent within the brain.