Depression makes a person’s world very small and narrow.  During a depressive episode, he enters a long tunnel of despair; a dark passageway encasing him in its concrete walls.  If he can see an exit, it is in the far distance, a sliver signifying a long and arduous journey ahead. 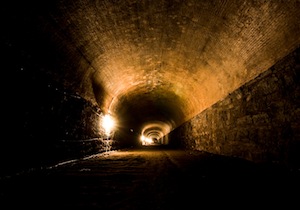 The tunnel constricts his vitality, his link to the world which isn’t all doom and gloom; where miracles and beauty and goodness are happen, But he cannot see it, cannot perceive the actuality of such events.  His reactions to these events is often sadness; a despair borne of his inability to feel the happiness of such things.  There is also a sense of hopelessness because the failure to enjoy such things isn’t just temporary.  He feels it’s permanent.  He will never feel the joy of a great vacation, a heart-felt complement or the glow of a child’s sweet face.

As he travels the tunnel, it can close in on him.  He can feel suffocated; that he will die of asphyxiation before he blows out the other side of the tunnel.  His breath feels like it is being sucked out of his lungs.  He just doesn’t have the stamina to continue.  But continue he must, if only on bloodied knees.

As long as you’re on your knees, it might help to pray.  Abraham Lincoln, who suffered from depression his entire life, once wrote:

“I have been driven many times to my knees by the overwhelming conviction that I had nowhere to go.  My own wisdom, and that of all about me, seemed insufficient for the day.”

Lincoln knew all too well the tunnels of depression.  But he kept going, kept persevering.  And you will too.

Flashlights can help us in the tunnel as can wise guides or trusted friends; flashlights of skills about how to deal with depression before we go into the tunnel.  One of the most important skills is the hard-won knowledge that there is a beginning, a middle and end to our depression — even if we don’t feel this is so at the time. A wise guide can be a therapist who can tell us what to expect and not to listen to the howling winds of depression that blow through the tunnel, to ignore the bats of doubt that live in the recesses of the walls.  A trusted friend, can be someone who experiences depression him or herself, but is well enough at the time to walk through the tunnel with you, step by step.

While flashlights don’t light up the whole tunnel, don’t make the depression magically go away, they do provide a beam of concentrated light that burns through that darkness and provides a path, a walkway to an opening that is the end of the experience of a depressive episode.

Often, folks with depression can see the entrance to the tunnel and are heart-struck with a sense of real dread.  Having experienced depression before, they know just how bad the journey will be once they’re through the portal.  But they are pulled, as if from a rope emanating from the dark reaches of the tunnel, into depression.  Attempts to turn around work sometimes.

Sometimes we are strong enough.  Sometimes, we have the strength to override the gravitational pull of the tunnel.

But sometimes we don’t.  And in this sense, it’s confounding.  Because if we can do it sometimes, why can’t we do it all the time?  Maybe that’s part of the mystery of depression.  Because sometimes, even when armed with the best of skills, we still must enter the tunnel of depression.

But we must always remember the bright light that awaits us on the other side.