Why did you write your newest book, Vital Signs: The Nature and Nurture of Passion?

Because it was a natural evolution from the book that preceded it, Callings: Finding and Following an Authentic Life, and because I’m just fascinated by how people manage to hold on to their vitality and life force against all the downward-pulling forces of life and culture.

In the Introduction to Vital Signs, you write that the book is geared towards “being in love with life” versus your first book, Callings, that addressed “doing what you love”. In what ways are the two the same thing? In what ways are they different? 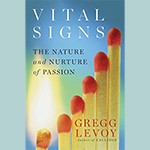 As for distinctions between them, I look at the two books this way: Callings:Finding and Following an Authentic Life was more about finding a passion, and Vital Signs: The Nature and Nurture of Passion is more about living passionately. Developing the skill, the stance, of passion that can inform all arenas of your life, not just the vocational.

In your mind, can a failure to live a passionate life cause and/or contribute to true clinical depression? How so? Can you give us any examples?

I believe so, yes. For starters, if you’re not expressing your passion and vitality, whether in your work or love life, creative or spiritual life, then you’re probably suppressing it, or repressing it, or depressing it, which all mean the same thing: pushing it down. And whatever we refuse to express will either explode or implode, and I think depression is a form of imploding. Here’s an example from my own files:

I’m not generally prone to depression, but a couple of years ago I had a nasty bout of it. I was sleeping too much, feeling lazy, bored, disconnected from everything and everyone, lacking initiative but restless. I just felt profoundly off, and I couldn’t get to the bottom of it.

Until I had a dream of being chased by an enormous black dragon—the size of a T-rex with wings—and feeling like a rabbit who couldn’t find a hole to duck into.

I tried fighting off the dragon with a safety pin, and finally, out of sheer fright (and, I remember, a distinct sense of incredulousness that I wasn’t going to be rescued at the last second, like in the movies), I woke up. Literally woke up from the dream.

My interpretation of the dream was that the dragon was my writing. My real writing. Not the academic-style stuff I’d been doing a lot of at that point, but the freewriting practice I meant to be doing alongside it, and wasn’t. In a sense, I was playing it safe with all that cautious, academic writing—thus the absurdly inadequate safety-pin defense—when I should have been doing more passionate, intuitive writing.

But the dragon woke me up, literally and figuratively, and over the next few months I started doing my real writing again—and here’s the punch line: the boredom and depression lifted.

That experience reminded me how closely related depression and repression can be.

In your experience, what are some of the reasons people don’t follow their passions?

One reason is that people often put security before passion. There’s nothing wrong with security, but when it routinely takes precedence over your passion and aliveness, you’re courting disaster (a word that means “against one’s stars.”) I once heard it said that heroism/heroinism can be redefined for the modern age as the ability to tolerate paradox. To hold two seemingly contrary ideas/impulses/energies/beliefs inside you at the same time and still retain the ability to function. In this case, passion and security. Which don’t cancel each other out. They’re both true. We need both of them. And they both need to be brought to the bargaining table to hammer out a treaty that’s going to serve them both, rather than trying to stuff one or the other under the floorboards just to be rid of the tension.

Another reason involves the kinds of suppression and repression that are common to certain styles of parenting, schooling, gendering, bibling, and corporate enculturation, where you’re encouraged to leave maybe the best parts of you out in the parking lot when you punch in, like your emotional life, your personal life, even your spiritual life. I recently consulted with a woman who told me that when she was growing up, her parents sent her to her room for any displays of “negative emotions,” like tears, anger or frustration. That is, punished her. Banished her.

So it’s no surprise that at 40, after a lifetime of repressing half her emotional

repertoire, she’s feeling blocked from being her full powerful self, the one she’s going to need in order to be the healer she intuits herself to be. She quite rightly refers to her mission at 40 as “soul retrieval.”

What tips can you give our readers about how they can begin to follow their passions?

For starters, it might be useful to begin identifying where you lose it. Where it leaks out of your life. Which routines, relationships, involvements or beliefs drain your energies, and which ones revitalize them. Maybe it’s a job that sucks the life out of you, or a relationship in which you feel like a ghost of your full vital self, or your eager, capable mind being put in dull circumstances, or any involvement that’s literally de-meaning. Lacking in any sense of meaning or purpose.

Maybe it’s socializing out of guilt or obligation, driving in rush hour traffic when you don’t have to, television, letting yourself be trapped by talkaholics, or doing your own taxes rather than farming it out.

Secondly, it’s important to understand that passion can be cultivated.

Turned on as well as turned off. It’s not one from the “either you’ve got it or you don’t” department. And cultivating it happens most readily at the level of the gesture and the moment, not the 5-year plan or the extreme makeover. Though even at the micro-level, action is ultimately required. Especially spontaneous action. The equation is: ready, fire, aim.

I was sitting around with some friends one evening recently when one of them said, “You know what the problem is? We’re not outrageous enough.” When I asked him what he would do if he were to be more outrageous, he thought for a moment, then reached up and swept his hair from middle-parted and slicked back to side-parted with a cowlick dangling from his forehead—instantly transforming him from Richard to Ricardo. And he said, “I’d come into work like this.”

The point is: start with the subtlest impulse to express yourself and act on your passions, and build from there. Begin identifying little moments of choice that lead you either toward or away from your sense of aliveness.

I think it’s important to distinguish, also, between healthy and unhealthy passion. In other words, there’s a difference between being called and being driven, and not all passions should be acted on. There’s something called harmonious passion (flexible persistence toward an activity and more of a flow state) and obsessive passion (persistence at any cost, the passion controlling you rather than the other way around, and self-esteem and identity all wrapped up in performance).

And there’s a pretty simple test to determine which one is in the driver’s seat: when the payoffs dry up, do you still do the work? Are your passions still intact?

Gregg Levoy  is the author of Vital Signs: The Nature and Nurture of Passion, and Callings: Finding an Authentic Life – rated among the “Top 20 Career Publications” by the Workforce Information Group and a text in various graduate programs in Management and Organizational Leadership.

He is a lecturer and seminar-leader in the business, educational, governmental, faith-based and human-potential arenas, and has keynoted and presented workshops at The Smithsonian Institution, the EPA, Microsoft, and Amerian Express, to name a few.  He is also a frequent media guest on ABC, CNN, NPR, PBS, and others.