What a cruel thing is war; to separate and destroy families and friends, and mar the purest joys and happiness God has granted us in this world; to fill our hearts with hatred instead of love for our neighbors and to devastate the fair face of the earth.  – Confederate General Robert E. Lee

Depression has many roots. Several of them anchored in the deep soil of our past.

I dug down into that ground last week. It was the 70th anniversary of D-Day; America’s landing in Normandy and entry into World War II. Watching all the television tributes to these now old and fading veterans, I thought of my dad.

My father enlisted in the Navy in 1944. He was 18 years old. He fought on a destroyer ship in the Pacific theater. He saw many of his young buddies meet horrible deaths. 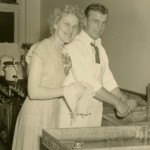 The war not only took a devastating psychological toll on him, but also his family in the years that were to unfold. In a very real sense, my mom, my siblings and I were also casualties of that war that never ceased in my dad’s head.

While he died in 1981, he’s still on my mind some 33 years later. I’ve gone from a young man to middle-aged, from a teenager in college to a lawyer about to mark my twenty-fifth year in the profession. I can’t help but look back at him and our time together as father and son. To the man he was and the man I’ve become.

I read a New York Times’ review of a book out about J.D. Salinger, author of The Catcher in the Rye.  The article noted that Salinger, who served in the infantry during WWII in Europe, witnessed a lot of death and mayhem and struggled with depression his whole life:

“Salinger’s experiences during WWII heightened his sense of alienation.  The war left him with deep psychological scars, branding ‘every aspect’ of his personality and reverberating through his writings.  Salinger had suffered from depression for years, perhaps throughout his entire life, and was at times afflicted by episodes so intense that he could not relate to others.”

Like Salinger, my father came back from the war a broken man. He, too, would also have trouble relating to others. He had frequent nightmares. As children, we heard his screams behind our parent’s bedroom door. When he wasn’t raging, he was usually drunk. When he wasn’t angry and violent, he was depressed.

Dad survived his years of PTSD by drinking. Cheap beer and bottom shelf whiskey. He became a hard-core alcoholic. It gave him a brief respite from the demons shouting in his head. A sort of dying to a day of struggle in the hope that he would wake up the next day and all his pain would be gone. 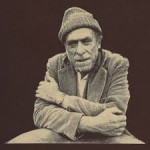 Writer and hard-core drinker Charles Bukowski wrote about this type of dying,

“Drinking is an emotional thing. It joggles you out of the standardism of everyday life, out of everything being the same. It yanks you out of your body and your mind and throws you against the wall. I have the feeling that drinking is a form of suicide where you’re allowed to return to life and begin all over the next day. It’s like killing yourself, and then you’re reborn. I guess I’ve lived about ten or fifteen thousand lives now.”

Dad ultimately died from too much drinking. Smoking three packs of Camel unfiltered cigarettes a day couldn’t have helped either. I was 19 when they diagnosed him with cancer. He would spend the last six weeks of his life in the hospital.   He seemed unrepentant, never saying he was sorry for anything.  Maybe he thought he didn’t deserve forgiveness. Or, maybe it was too frightening to think what our reaction would be.

But I remember one night that I went to visit him in the hospital towards the end. There wasn’t anyone else in the room. It was dim, but the lights near the nurses’ station cast enough light to see in the ill-defined shadows. Dad was awake when I got there. I pulled up a chair and sat next to his bed. I kissed his sweaty brow, but avoided looking into his eyes.

“Dad, just rest,” I said.  He gave a weary nod. A little more time passed. It was quiet except for periodic announcements over the P.A. system. I was sure he was asleep.

Then, quite unexpectedly, I felt his hand stroking my back as I hunched over in my chair. I immediately knew it was his way of connecting beyond the words he couldn’t bring himself to say: “I love you and I’m sorry for everything.”

My favorite poet, Mary Oliver, remembers her long-deceased father in this moving poem:

My father, for example,

who was young once

on the darkest of nights

to the porch and knocks

wildly at the door,

and if I answer

I must be prepared

for his waxy face,

for his lower lip

And so, for a long time,

I did not answer,

between his hours of rapping.

But finally there came the night

when I rose out of my sheets

and stumbled down the hall.

and I knew I was saved

and could bear him,

with even the least of his dreams

and the meanness gone.

And I greeted him and asked him

and lit the lamp,

and looked into his blank eyes

in which at last

I saw what a child must love,

had we loved in time.