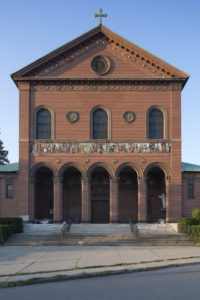 A year ago, I started volunteering at a Church on the East Side of Buffalo, the poorest and most segregated section of town rife with a high crime rate, violence, drug trafficking, and prostitution. And right in the middle of it all is St. Luke’s Mission of Mercy.

St. Luke’s was an abandoned Catholic Church twenty-five years ago that had become empty and useless after the Polish immigrants who built it in 1930 left for the suburbs.  Into this void came Amy Betros, a big woman with an even bigger smile and hug, who owned a restaurant where college students hung out.  Amy decided, moved by something deep inside her, to chuck it all and do something for the poorest of the poor.

So, she sold her restaurant and, together with a guy named Norm Paolini, bought the broken-down church. It quickly became a place where people could sleep on the church’s floor to get out of the elements and get some hot food.  But just as important, that got some food for their souls. They got big servings of hope and seconds if they wished.

I was desperate to find some meaning in my life that wasn’t about all about ME and my recovery, or lack thereof, from depression.  I felt poor – – poor in spirit.

God must have heard my plea because into my life dropped a criminal defense lawyer, Mike Taheri.  I guess He works in mysterious ways, I thought more than once. We had never crossed paths over our long careers in the law, given my personal injury practice. We met by chance at a dinner. He told me about St. Luke’s.

Tentatively, I started to go to Mass at St. Luke’s.  I’m no die-hard Catholic. Far from it.  If anything, I think of myself as a left-of-center spiritual person with a Catholic bent.  I showed up, and at first, nothing.  I didn’t feel anything. I felt out of place.  Why was I even here, I asked myself. 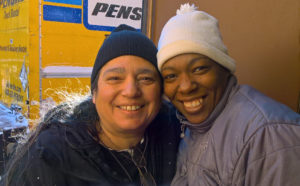 I finally met Amy. She’s the one in the blue hat in the photo. She had hundreds and hundreds of people volunteer to help out at St. Luke’s every year, and maybe thousands express that intention but never show up.

I approached her, and she looked deep into my eyes as I spoke as if I were the only person in the room.

I asked Amy to pair me up with a child who didn’t’ have a dad.  I have one child, an eighteen-year-old daughter who’s away as a freshman at college.  I felt the deep desire to connect with a child who didn’t have much. Not another lawyer or other upper-middle-class white professional, though I had many wonderful friends who fit that description.

I wanted to help a child.  But, truth be told,  I also needed help. Help beyond something my antidepressants and psychotherapy could give me. I needed a connection to something bigger than the small world that depression could whittle me down to.  I wanted something radical. And I got it. 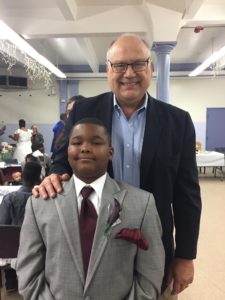 When I met George a year ago, he was a bit quiet. Solid for an eleven-year-old, he didn’t talk during our first outing. We went to Wendy’s and ate burgers and fries sitting in the parking lot overlooking some long-abandoned buildings, a common sight in this corner of town. George would sit in the passenger seat up front, munching silently on his food, thinking of what I didn’t know.

During the first month or two of getting to know each other, George would often kick and punch me.  It appeared to be playful but wasn’t.  Later I learned that George hadn’t had much stability in his life.  His grandpa, a retired fireman and the only stable male influence in his life, suddenly died when George was five leaving a gaping hole in his life.  And his heart. He was angry about it all. But didn’t’ have words to express it. So, he kicked and punched under the guise of the two of us being superheroes engaged in a cosmic battle. But I knew otherwise.  He was pushing me away. He was scared, I later understood, that we would become close and that I’d leave him as his beloved Grandpa did.

Time passed, and things got better. Slowly. He kicked me less.  I took that as some improvement in our relationship. But, there were many times I thought about quitting because I thought I wasn’t making a difference in George’s life. But I hung in there.

The toughest times with George were those when I am pretty down and tired at the end of the day when I normally would pick him up.  Some of the fatigue was from work. Some of it because of the draining, depressing thoughts that would take up residence in my head.  When a night reserved for George coincided with a horrible day living with depression, I’d sit in my office looking at the phone. 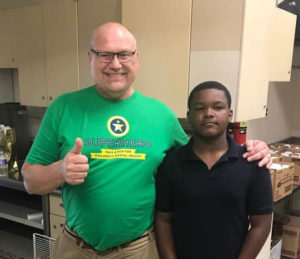 “Should I call and just cancel, saying I don’t feel well?” I’d think to myself.  This has happened more than once. I struggled with the call knowing how disappointed George would be, worrying that he would push me away because he’d think I wasn’t reliable.  But that didn’t happen. Even after the few times I actually did cancel because I felt too miserable. Now, even when depressed, I suck it up and make sure I show up for George. When with him, I find myself drawn less to my inner turmoil and more into his life that needs me to be there for him.  As we eat pizza and chicken wings over dinner (and George can eat a lot), I ask him about his week. He always seems surprised that I show him so much attention.

There’s something lost yet magical in his eyes. A light that you see in children’s eyes that is unmistakable.  He’s funny, a natural class clown that kids gravitate towards. Adults likewise feel the same pull because there’s something undeniably sweet about George.

Yes, George can be full of mischief, and all our get-togethers don’t’ go smoothly.  I sometimes have to tell him to “knock it off.” In the early days of our friendship, he wouldn’t listen. I was just another person yelling at him.  But he learned over time that I really cared about his feelings and our relationship. So I started ending our visits with “I love you.” He usually said nothing in return, but I knew it was affecting him.

One time when driving to a gym, I asked George what he thought about himself.  “I’m stupid,” he said quietly as he looked out the window at the passing traffic.  “No, your not. You’re smart. And I believe in you 1000%!”  George now knows that I am going to pick him up when he’s down. He trusts me. 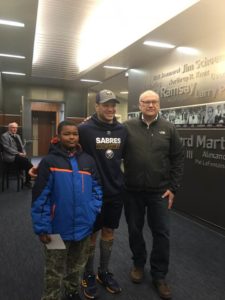 Yesterday, we went to a hockey game. We got some free tickets.  During the game, I would look over at George. I could tell he wasn’t into hockey.  Between periods, he found greater joy in my chasing him around the halls of the arena, trying to catch him. The security guards looked at us strangely yet somehow bemused. This was George’s favorite thing that day. Until, that is, the horn blew and the game was over.

After the game, we met Buffalo Sabres star player Kyle Okposo, who had just begun volunteering to be a spokesman to fight the stigma of mental illness. So we got to go down and stand outside the Sabres room to meet Kyle. George didn’t know who he was, only that he was the only African American on the team (because I told him this) and one of the few in the National Hockey League (I told him this, as well).

The time came and out walked Kyle. I greeted him with a firm handshake. George, who is shy in the presence of adults he doesn’t know, was easily charmed by Kyle’s warmth and big small.  “Want a signed photo of me, George?”  He nodded and looked at it a long time after it had found its way into his hands.

Sometimes, people comment that I am doing such a wonderful thing. That is, helping George.  I guess there’s some truth in that. But the much larger truth is how much George helps me.

It’s funny how a friendship so special came out of the brokenness of my depression.  It reminds me of the lyrics of “Anthem,” a song written by Canadian poet and singer Leonard Cohen:

Ring the bells that still can ring

There’s a crack, a crack in everything.

That’s how the light gets in.

George’s big spirit, friendship, and at times, our almost father/son relationship, filled my cracked heart where once it felt empty. The crack was how the light got in.  And depression takes a backseat now when George is around.

Depression is just no match for George.

WBFO, the NPR affiliate in Buffalo, did a radio interview with George and me (and a short video below) three years ago, “One Man Treats His Depression By Giving Back.”

2 thoughts on “Travels With George: Depression Takes a Backseat”