Burnout is nature’s way of telling you, you’ve been going through the motions, your soul has departed; you’re a zombie, a member of the walking dead, a sleepwalker. False optimism is like administrating stimulants to an exhausted nervous system.  – Sam Keen

Sitting across from Tom, a lawyer for the past 15 years, I was struck by his ashen face.  Before he said a word, before I asked him how his practice had been going, his slumped shoulders spoke volumes about a good man weighed down. As we spoke over coffee, he asked if I thought he was suffering from the “Big D” – depression.

As we spoke, he asked if I thought he was suffering from the “Big D” – Depression. 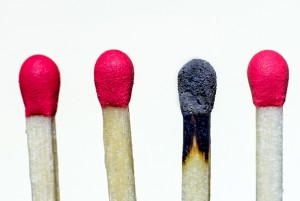 According to an ABA Journal article, lawyers facing increasing pressure to “value engineer” their services have adopted a “better-cheaper-faster” approach to practicing law because that’s what their clients are demanding.

This is one of the conclusions contained in a recent report on the future of the legal profession prepared by The New York Bar Association.

“Consumers have become more suspicious of institutions,” the report says, and clients are less willing to take their lawyer’s advice at face value and more willing to sue when they are unhappy. Technology is also changing client demands.

“Electronic communication has fueled a culture in which clients want more legal information, answers on the spot, and lawyers who can interpret, rather than simply provide, information,” the report says.The result is more specialization and an emphasis on ability to deliver higher quality services at a lower cost and in less time.”

This was certainly true in Tom’s case.  There were no limits to the demands put on him – by both others and himself – to be better, cheaper, and run faster.  As if he were a machine.  He hunkered down into a survival mode, had little positive energy to invest in himself or his family and ultimately burned out like a meteorite entering the earth’s atmosphere.

Burnout isn’t just a consequence of trying to keep up with an insane schedule.  It’s also fueled by a common personality trait found in many lawyers: perfectionism.

Author of the book Stress Management for Lawyers: How to Increase Personal & Professional Satisfaction in the Law, Amiram Elwork, Ph.D. writes:

“Because law requires objective logical analysis and close attention to details, the legal profession attracts perfectionists. These are people who live by the rule: ‘If I don’t do a perfect job in every detail, I will fail.’ Perfectionists tend to be workaholics who are often viewed as inflexible, uncomfortable with change, and obsessed with control but unconvinced that they have it. Since perfection can’t be achieved, striving for it can cause constant dissatisfaction.”

“My clients are perfectionists,” says Alden Cass, a therapist to both corporate attorneys and men on Wall Street. “They have very rigid ideals in terms of win-lose,” he continues. “Their expectations of success are through the roof, and when their reality doesn’t match up with their expectations, it leads to burnout—they leave no room for error or failure at all in their formula.”

Out of Sync With Core Values 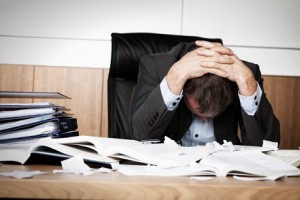 Elwork opines that “another reason that some lawyers experience burnout is that their core values are not aligned with their own behaviors. Sometimes this problem reflects an internal psychological conflict, whereas at other times it is a conflict between the lawyer’s values and those of the organization at which he or she works.”

My friend Tom is in this boat.  He works for an insurance defense firm.  He’s a compassionate man who tries his best to be a good person.  The culture of his firm, however, tells him to “hammer” personal injury victims at their depositions and trials.  He hates to do this but doesn’t know what else to do.  He has a family to support after all.  He feels stuck at his job.

He suspects other lawyers at his firm are burned out, but doesn’t really know what a burned out lawyer looks like.

There are, however, telltale signs.

Similarities Between Depression and Burnout

While they share some similarities, there are some important differences between the two conditions.

Both depressed and burnout sufferers show symptoms of withdrawal and fatigue.

Differences Between Depression and Burnout

Burnout is a state that is just induced by severe stress. Depression, on the other hand, is a clinical behavioral disorder affecting one’s mood. As such, it is, therefore, more appropriate to say that when you are having a burnout you are also at risk of experiencing or developing depression rather than the other way around.

A Strategy for Avoiding Burnout

It’s easier to avoid burnout in the first place than it is to overcome it. Here a handful of do-able strategies for escaping its clutches:

The Happy Lawyer: Making a Good Life in the Law by Nancy Levit and Douglas Linder